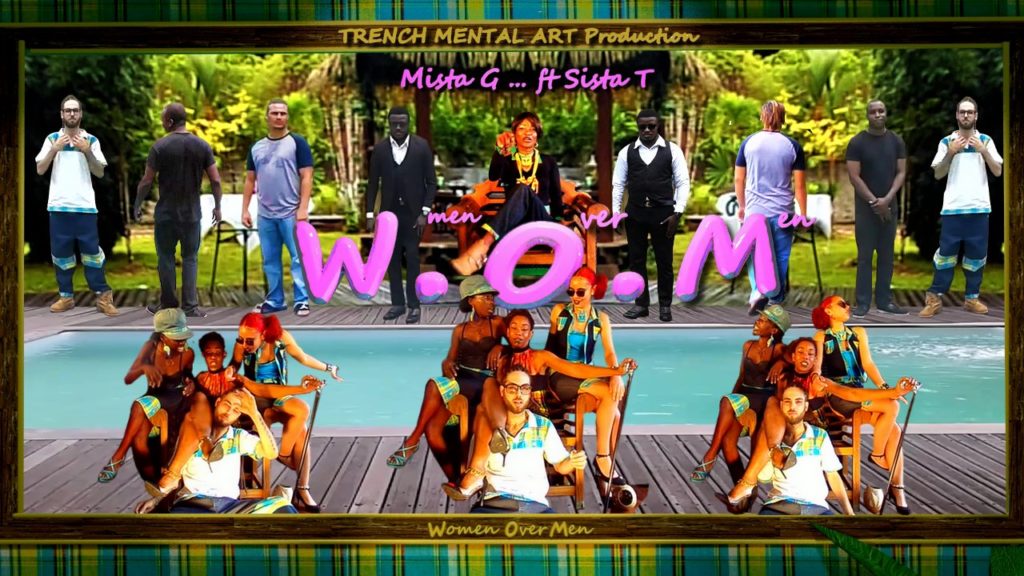 Official Release of W.O.M (Women Over Men) by Mista G... ft. Sista T., a NEW & innovative dancehall which reverses all the codes & norms to give back honor & pride to Women

W.O.M. (Women Over Men) by Mista G... ft. Sista T. Invites you in this alternative reality!

After Happy Lady, Trench Mental Art Produksyon is proud to present W.O.M. (Women Over Men) by Mista G... who comes back this year with this NEW dancehall 100% composed by this autor-composer-interpretor, in charming company this time, through this featuring with Sista T. for a title which will fast become the new tendency, an upcoming reference!

In featuring with Sista T & her choirs (Misty ft. Alian), W.O.M., standing for "Women Over Men", parodises traditionnal dancehall, which generally diminishes women to only valorize their physical appearances (body & intimate parts), and answers to all the "Shake that booty", "Broke it down", "An Vlé An Gyal" or other messages misprizing and underconsidering women for their simple looks, attitudes & abilities to dance or be stripers .

Without tabou, W.O.M. Delivers the needs & desires of liberations that modern & independent women reclaim & take back to be free to choose to be who they want to be by highlighting the different & diversified personalities which divide but also unify all women!

It's then with humor that Mista G... parodises most of dancehall, rap, r'n'b and hip hop singers & the music industry, which have a tendency to show & treat women as faire-valoir, using them only for their bodies, without giving them the opportunity to express, wihout sharing the mic', what Sista T. determines to drastically rectify & revolutionize without even twerking or getting naked!

Joined for this rhythmed & innovative title, W.O.M. (Women Oven Men) is for these artists the acclaim & confirmation of the liberation of women personalities, free to dress, act & think as they want to, answering or not at society's codes & norms, free to assume their bodies, nakedness & most than all their hairs, for what's more beautiful than being natural?It's then without tabou that Sista T defends Women in general & particularly Black Women who are far more beautiful, strong & courageous that mainly represented!

W.O.M. (Women Over Men) by Mista G... ft. Sista T. is a music video clip which reverses all the codes, all the norms, all the rules to ameliorate genders' touches & relationships to uprise genders' & sexes' equalities!

Don't lose a minute more to discover W.O.M. (Women Over Men) by Mista G...ftt Sista T. , the NEW dancehall to listen & watch without limits as a Serum!

Title legally available in a few days on every official loading sites, to also discover on Mista G...'s future album, M********Y, at its Official Release (album to win by descrypting its title/ Set the KEY at right place) #WOM#WomenOverMen#SOMK #TTMR#GrèveDuTwerk #TwerkStrike)

What if WE reverse the codes? What if WE change the norms? What if Women run on Twerk Strike, what would happen?

Men, would YOU be ready to start twerking to seduce them?

Men, would YOU agree to be treated like pieces of meat, only for your body and physical abilities?

Men, would YOU agree to be treated or reduced to your body without considering your other qualities & values? No?!Why? It's just as many of you do treat women still today, so what's so bad?

Touched for a cloth, criticized for a "no", abused by frustration, mentally, verbally or physically assulted, many women are constantly victims of mysoginous, sexist, discriminative, diminishing & submissive agressions, without even noticing it sometimes, for the power of males rests on patriarcal believes denying thus Women, who are the real sources of life, love and peace, to enjoy of many liberties sold by the urban music industry (dancehall, hip hop, r'n'b, rap or reggaeton) & the medias. Mista G... & Sista T then say "No More" in this production 100% realized by Trench Mental Art Produksyion, a parodie in a serious & engaged tone in favor of all kind of liberations!